Lynn Roller’s field is the art and archaeology of the ancient civilizations surrounding the Mediterranean Sea, from prehistory to the rise of Christianity in circa 400 CE. She received her BA and MA from Bryn Mawr College and her PhD from the University of Pennsylvania, and has taught at UC Davis since 1977. Her principal research area is the art of ancient Greece and adjacent cultures, especially the Phrygians in central Turkey and Thracians in southeastern Europe. Professor Roller participated in archaeological excavations and surveys in Corinth, Greece, and Gordion, Turkey. She is currently the co-Director of a survey project at the site of Gluhite Kamani in southeastern Bulgaria. Her work investigates the interactions between the ancient Greeks and neighboring peoples with special emphasis on visual culture and religious practices and their role in identity formation. She has a strong secondary interest in the art of the eastern Roman Empire.

Early Greek Art: the art of ancient Greece from its origins in the early first millennium BCE to the Classical period, mid-fifth century BCE

Later Greek Art: explores the art of ancient Greece from the Classical period, mid-fifth century BCE through the end of the Hellenistic period, first century BCE, and the Roman conquest of Greece

Roman Art: traces Roman art from the founding of Rome, eighth century BCE, through the dissolution of the Roman Empire in the fourth century CE.  Emphasizes the art of Rome and the Roman provinces.

Architecture and Urbanism: architectural forms, materials and construction methods, and urban planning in ancient Greece, Rome, and the Roman Empire.

Greek Art and the Body: investigates the Greek fascination with the human body, including the origins of male and female body representation, costume and nudity, human-animal composite bodies, and deviant body types.

The Legacy of Greece in Roman Art: explores the impact of Greek architecture and sculpture on Roman art, discusses how Romans collected Greek art and adapted it to their own purposes.

Greek Sanctuaries: Greek cult centers as spaces for display of architecture and sculpture; development of depictions of Greek mythology and the role of myth in Greek cult practice and identity

Greek and Roman Portraiture: analyzes the strong tradition of interest in the representation of distinct individuals; political, philosophical, and literary figures; portraiture of private individuals; tensions between idealism, ideologies, and the desire for accuracy

Narrative in Greek Art: study of the techniques and styles used in Greek art to convey a complex story; origins and development of narrative subjects; devices used to express time and space in narrative content.

In Search of God the Mother:  the Cult of Anatolian Cybele (University of California Press, 1999)

leroller[remove-this-and-replace-with-at]ucdavis.edu
Back
This item appears in: 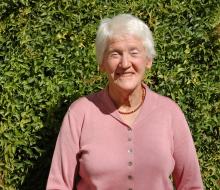