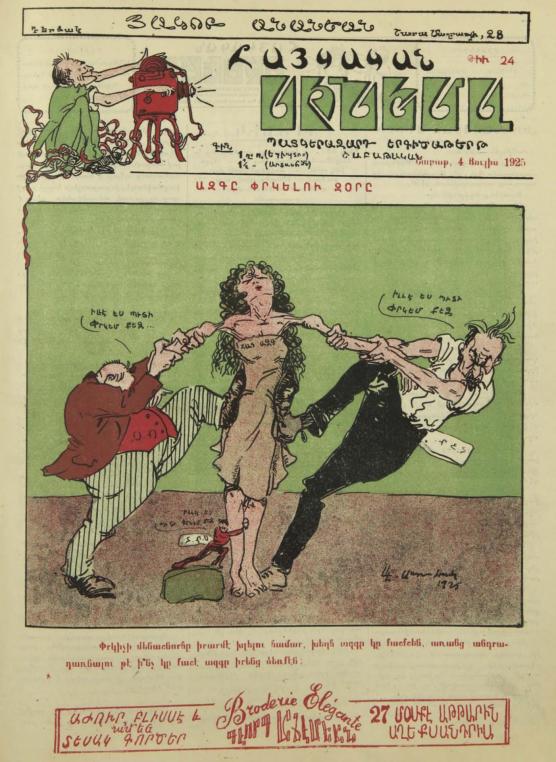 Twentieth-century nationalism was marked by the effective use of press culture and graphic satire to shape the discourse of modernity. Along the way, women’s rights and minority rights were struggles that formal institutions resisted and appropriated. This year’s Templeton Colloquium invites four experts to address the often-overlooked role of liminal bodies in the processes of modernization and the forms of modernity in press and satire cultures based in such metropolitan centers as Tehran, Cairo, Istanbul, and Beirut.

Yasemin Gencer is a historian of Islamic art focusing on late Ottoman and early Republican visual culture and print media with a special interest in text and image studies. Gencer is the author of an online research blog entitled Today in 1920s Turkey and a founding member of Khamseen: Islamic Art History Online, a web-based platform devoted to the production and distribution of teaching resources for Islamic art history. Gencer currently teaches Islamic art and architecture at Wayne State University and is an Affiliate Scholar at Indiana University’s Institute for Advanced Study.

Houri Berberian is a professor of art history, the Meghrouni Family Presidential Chair in Armenian Studies, and the director of the Center for Armenian Studies at UC Irvine. Her most recent publications include “Gendered Narratives of Transgressive Politics: Recovering Revolutionary Rubina,” in Age of Rogues: Rebels, Revolutionaries and Racketeers in Turn of the Century Eurasia Minor, edited by Ramazan Hakki Oztan and Alp Yenen (Edinburgh University Press, 2021) and the forthcoming article co-authored with Talinn Grigor, “Pictorial Modernity and the Armenian Women of Iran,” Journal of Iranian Studies. She received the Dr. Sona Aronian Book Prize for Excellence in Armenian Studies (2020) and the Der Mugrdechian Society for Armenian Studies Outstanding Book Award (2019).

Camron Michael Amin is a professor of history at the University of Michigan, Dearborn. He publishes on the Iranian press and state-feminism in 20th-century Iran. His current work includes two oral history projects:  The Michigan Iranian American Oral History Project and the Modern Middle East Travelers Oral History Project. Amin served as the president of the Association for Iranian Studies from 2018 to 2020.

Amin will address “Satire and Bigotry in Iranian Press Culture.”

Nadia von Maltzahn is a research associate at the Orient Institute Beirut (OIB) in Lebanon and directs the “LAWHA – Lebanon’s Art World at Home and Abroad: Trajectories of artists and artworks in/from Lebanon since 1943” project. She is co-editor of “Insights into Cultural Policies in Lebanon” (Orient-Institute Studies, 2021) and author of “Heritage, Tourism, and the Politics of National Pride. The Baalbeck International Festival in Lebanon” (Quaderni storici, 2019) and “The Museum as an Egalitarian Space? Women Artists in Beirut’s Sursock Museum in the 1960s and 1970s” (Manazir, 2019).

Maltzahn will present “A Thoughtful Exaggeration: Lebanon’s Early Independent Period through the Eyes of Diran.”

Organized and moderated by Talinn Grigor, professor of art history, UC Davis. This event is co-sponsored by the Department of Art and Art History and the Jan Shrem and Maria Manetti Shrem Museum of Art.

Manetti Shrem Museum of Art, Community Education Room.
This event will also be live-streamed and recorded.

Visitors must adhere to the Manetti Shrem Museum of Art’s health and safety protocols.