Grigor’s research focuses on 19th- and 20th-century art and architectural histories through the framework of postcolonial and critical theories, grounded in Iran, Armeno-Iran, and Parsi India. Her books include a winner of the Saidi-Sirjani Book Award from the Association of Iranian Studies, The Persian Revival: The Imperialism of the Copy in Iranian and Parsi Architecture (Penn State Univ., 2021); Contemporary Iranian Art: From the Street to the Studio (Reaktion, 2014); and Building Iran: Modernism, Architecture, and National Heritage under the Pahlavi Monarchs (Periscope, 2009). Her articles have appeared in the Art Bulletin, Getty Research Journal, Third Text, Aggregate, Future Anterior, Journal of Iranian Studies, and Journal of Comparative Studies of South Asia, Africa, and the Middle East. She has held residential fellowships at the National Gallery of Art/CASVA, Getty Research Institute, and Cornell and Princeton universities. Her scholarship has benefited from grants from the Social Science Research Council, the University of California Humanities Institute, the American Research Institute of the South Caucasus, the Aga Khan Program at MIT, and the Opler, Whiting, Norman, Roshan, Soudavar, Mossavar-Rahmani, and Persian Heritage foundations.

Contemporary Global Art: this lecture course explores the relationship between contemporary life and the making and consumption of art. Its primary goal is to reexamine what art is, what contemporary is, and how these two come to intersect.

Understanding Visual Culture: this introductory course provides a basic visual literacy in order to critically analyze the complex and increasingly visual world around us. It introduces historical and contemporary cases where the visual and the visible have played a fundamental role in shaping our environment and discourses.

Understanding Architecture: introduces the basic tenants of architectural culture and familiarize students with the foundational ideas, principles, philosophies, histories, and theories of field of architecture, both in the past up to the contemporary periods.

Museum in the Age of Spectacle: this honors course raises major themes related to the institution of the museum in the context of modernity, nationalism, (post)colonialism, and the society of spectacle.

Politics of Public Art: this lecture course traces the political dimensions of public art by examining the ways in which artists, public monuments, urban spaces, photography, propaganda art, and comics have been deployed to influence political ideology.

Sex and Space: explores the relationship between architectural and visual space and sexuality by examining the diverse ways sexual identities and visual histories have shaped each other.

Globalization of Contemporary Art: this graduate seminar premises on the idea that it is in the peripheries that the most anxious/ambivalent aspects of contemporaneity is revealed. Examining contemporary art globally, the course raises concepts of kitsch, market, censorship, agnotology, homelessness, and black in contemporary artistic discourse.

Imperialism of Historiography: this graduate seminar closely examines the history of art history as a field of knowledge that developed amid, and very much out of, 19th- and 20th-century imperial ideologies, European nationalism, and racial/colonial discourses.

Orientalism and Visual Culture: this graduate seminar centers on the relationship between the politics of knowledge and visual culture through the exploration of postcolonial theory and criticism.

Art and Violence: this first-year seminar explores the dialectical relationship between art and violence from the French Revolution to ISIS.

Cosmopolitanism and the Avant-garde: this graduate seminar examines the formation of the avant-garde as a European model of a bourgeois and middle-class cultural project, which rapidly disseminated and mutated globally. How has the discursive of the cosmopolitan come about and shaped the “world”? How did non-western architects and artists claim a “cosmopolitan” and “feminist” posture to participate in the transnational avant-garde?

The Persian Revival: The Imperialism of the Copy in Iranian and Parsi Architecture (University Park: Pennsylvania State University Press, 2021).

Contemporary Iranian Art: From the Street to the Studio (London: Reaktion Books, 2014)

Persian Kingship and Architecture: Strategies of Power in Iran from the Achaemenids to the Pahlavis, co-edited with Sussan Babaie (London: I.B. Tauris, 2015)

“Freemasonry and Architecture of Persian Revival, 1843-1933,” in The Mystery of Masonry Brought to Light:  Freemasonry and the Visual Arts from the Eighteenth Century until Now, eds. Reva Wolf and Alisa Luxenberg (London: Bloomsbury, 2019), 159-179

“’They have not changed since 2,500 years ago’: Art, Archeology, and Modernity in Iran,” in Unmasking Ideology: The Vocabulary, Symbols, and Legacy of Imperial and Colonial Archaeology, eds. Bonnie Effros and Guolong Lai (Los Angeles: UCLA Cotsen Institute of Archaeology Press, 2018), 121-146

“The Thing We Love(d): Little Girls, Inanimate Objects, and the Violence of Systems.”  From dossier of essays organized by Pamela Karimi and Nasser Rabbet on “The Destruction of Cultural Heritage: From Napoleon to ISIS” in Aggregate (2016)

“What Art Does: Methodological Privileging of Agency and Art History’s Global Dispute in 1901,’ in In the Wake of the Global Turn: Propositions for an ‘Exploded’ Art History without Borders, eds. Jill Casid and Aruna D’Souza (Williamstown, Mass.: Sterling and Francine Clark Art Institute, 2013), 126-42

On leave 2022-2023 academic year
Room 152, Everson Hall
tgrigor[remove-this-and-replace-with-at]ucdavis.edu
Back
This item appears in: 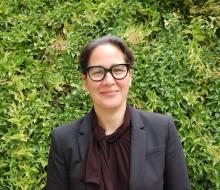