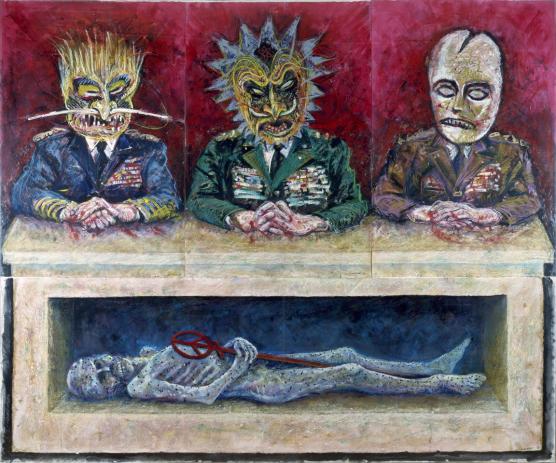 The George Adams Gallery in New York is currently showcasing nuclear war-themed works by Robert Arneson, professor emeritus, art and art history, 1962-1992, in a new exhibition. “Robert Arneson, The Anti-War Works: 1982-1986″ runs through October 26 at the gallery which is located at 531 West 26th Street in Manhattan.

The works on exhibition are part of a broader series of anti-war works dating from 1982 to 1986. These drawings provide an overview of an important body of work which comprises some nine dozen pieces in a range of mediums.

Arneson, an American sculptor and ceramicist, is considered as the father of Funk Art, the anti-establishment movement that incorporated a mélange of found objects, autobiographical subjects, and humor. He was born on September 4, 1930 in Benicia, California, and studied at California College of the Arts after working as a cartoonist for a local newspaper. In 1962, he was appointed professor of ceramics at UC Davis where he worked for nearly three decades, establishing the ceramic sculpture program and thereby helping bring the previously maligned medium into the realm of fine art. He is perhaps best remembered for his Egghead series, the bizarre sculptures of faces he installed around the UC Davis campus. He died on November 2, 1992 in Benicia from liver cancer, and his works can be found in major institutions around the world including including the Chicago Art Institute, the Hirshhorn Museum and Sculpture Garden in Washington, D.C., the Metropolitan Museum of Art in New York, and the Smithsonian American Art Museum in Washington, D.C.