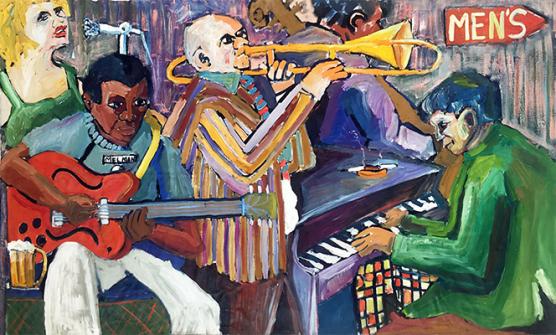 Mike Henderson, art professor emeritus, has two major exhibitions in San Francisco this fall. Henderson taught at UC Davis for 30 years before retiring in 2012. Along with being a painter, he is also a musician and filmmaker.

“Mike Henderson: Honest to Goodness” runs September 13 – November 17 at the San Francisco Art Institute where he earned his Master of Fine Arts Degree in 1970. The exhibition will be made up of about 20 works from the 1960s through the 1990s.

“Mike Henderson: At the Edge of Paradise” at the Haines Gallery in San Francisco will present recent, large paintings. The November 7 – December 14 exhibition was a pick in “7 Bay Area Gallery Shows to See” by the San Francisco Chronicle.

Henderson’s 1968 painting “Non-Violence” is in the Tate Modern’s exhibition “Soul of a Nation: Art in the Age of Black Power 1963-1983,” opening at the de Young Museum in November.