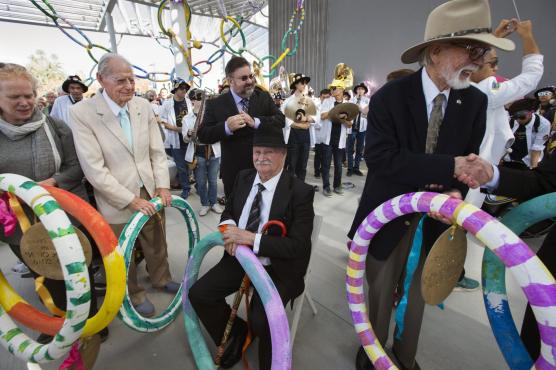 Manuel Neri, an internationally acclaimed artist and an early faculty member of the UC Davis art program, died on Oct. 18. He was known for creating life-size figurative sculptures in plaster, bronze and marble that are in major museum collections around the globe, including the Metropolitan Museum of Art, the National Gallery of Art and the Whitney Museum of American Art.

“Neri was a monumental force in the Bay Area that reverberated around the world,” said Annabeth Rosen, professor and co-chair of the Department of Art and Art History.

The only sculptor who was part of the second-generation Bay Area figurative movement, he explored and manipulated material, moving between plaster, bronze and marble, often with portions painted. He also did many drawings and paintings.

Neri was born in 1930 in Sanger, California, where his parents had emigrated from Mexico, and grew up in the Central Valley. He studied at the California College of Arts and Crafts and the California School of Fine Arts (now the San Francisco Art Institute) with Richard Diebenkorn and Elmer Bischoff.

Neri was deeply connected to the Beat era writers, artists and musicians in San Francisco, was a member of the artist-run cooperative Six Gallery, and a founding member of the Rat Bastard Protective Association with other important Bay Area artists. After coming to UC Davis, he purchased a former church in Benicia, California, where he maintained a studio for the remainder of his life, and also had a studio in Italy. He lived in Sacramento for the last seven years.

Recent exhibitions include “Manuel Neri: Assertion of the Figure” at the Anderson Collection at Stanford University, and “Manuel Neri: The Human Figure in Plaster and on Paper” at the Yale University Art Gallery, organized by UC Davis alumnus Jock Reynolds (M.F.A., art, ’72) who studied with Neri.

In 2006, Neri was presented with the Lifetime Achievement Award from the International Sculpture Center and has received honorary doctorates from the San Francisco Art Institute, California College of Arts and Crafts and The Corcoran School of Art, Washington, D.C.

A group of sculptures by Neri are on long-term display outside the Jan Shrem and Maria Manetti Shrem Museum of Art at UC Davis. They were installed as part of “Gesture: The Human Figure After Abstraction” in 2020 that  included 13 Neri works and photos of the artist in his studio.

The San Francisco Chronicle has published an extensive story about Neri.