Diana Strazdes’ field of interest is American painting, sculpture, architecture, and material culture of the long 19th century, especially and transatlantic developments in 19th-century American art. She has published on a wide range of topics, from the professional identity of American artists to historical interpretations of the American Home. Most recently she published “John Trumbull’s Nude Venus: Life Drawing and Its Intentions” in the journal Master Drawings and “The Display of Ruins: Lessons from the Ghost Town of Bodie” in the international journal of conservation and the built environment, Change over Time. She is working on issues of reception and audience interaction in public art during the Early Republic, with her two current research projects involving the artists Washington Allston and Rembrandt Peale.

Baroque to Modern Art: Introduction to visual analysis through study of Western art 1600 to the present, examining major artists and movements from Europe to North America. Study of the relationship of art and artists to political, religious, social change, and to changes in ideology, patronage, and audience.

Cultural History of Museums: Evolution of museums in the western world from the “cabinet of curiosities” of sixteenth-century Europe to the modern “art center.” The changing motives behind collecting, exhibiting, and interpretation of objects. Attention to museums’ historical legacies and continuing philosophical dilemmas.

The American Home: American domestic architecture and its responsiveness to changes in daily life from Colonial times to the present. Vernacular developments, effects of different socioeconomic conditions, and women’s role in shaping the home receive special attention.

American Art to 1910: Major movements in American art from the 17th-century English speaking colonies to the onset of World War I.

Issues in Realism — Mary Cassatt and Thomas Eakins: Examination of two American artists, both trained in Paris, who reflected different aspects of Realism as it developed in French art during the nineteenth century.

Art and Professional Identity, 1860-1910: Examination of the changed definitions of the American artist’s role that occurred in the late nineteenth century. Investigates how artists thought of their ambitions, how they used their training, how they defined their professional challenges, and how they related to their audiences, among other issues.

Defining Landscape: Investigation of the development of landscape painting in America during the 19th century in comparison to the European landscape traditions of the 17th and 18th centuries that played an instrumental role in defining the standards of landscape beauty. Class sessions will emphasize discussions of readings—both art historical essays and primary documents—and the analysis of images, including etchings and drawings from the collection of the Nelson Gallery.

Room 162, Everson Hall
dstrazdes[remove-this-and-replace-with-at]ucdavis.edu
Back
This item appears in: 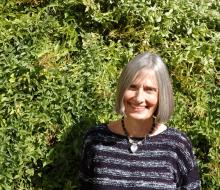