Heghnar Zeitlian Watenpaugh specializes in the history of art, architecture, and urbanism in the Middle East, including architectural preservation, museums, and cultural heritage. Her first book, The Image of an Ottoman City: Architecture in Aleppo, was awarded the Spiro Kostof Book Prize from the Society of Architectural Historians. She has also received Best Article Awards from the Syrian Studies Association and the Ottoman and Turkish Studies Association.  Her newest book, The Missing Pages: The Modern Life of a Medieval Manuscript, from Genocide to Justice was published by Stanford University Press in 2019. The Missing Pages is the first book to receive book prizes from both the Society for Armenian Studies and the Ottoman and Turkish Studies Association. It was selected by The New York Times in its New and Noteworthy section, it was reviewed in the New York Review of Books and the Wall Street Journal, and it was selected for the top 25 books in the arts for 2019 by the art publication hyperallergic. The Missing Pages also won the Gold Medal in World History from the Independent Publisher Book Awards, and it was shortlisted for the William Saroyan International Prize for Writing (non-fiction). Her research has been supported by fellowships from the J. Paul Getty Trust, National Endowment for the Humanities, Fulbright-Hays, Social Science Research Council, the Center for Advanced Study in the Visual Arts at the National Gallery of Art, and the Office of the President of the University of California. She has served on the boards of the Society of Architectural Historians, the Syrian Studies Association, and the Historians of Islamic Art Association, among other professional organizations. In 2020 she was named a fellow of the John Simon Guggenheim Memorial Foundation and a National Endowment for the Humanities Public Scholar.

Islamic Art: introduction to the art, architecture and urbanism of societies where Muslims were dominant or where they formed significant minorities from the 7th through the 20th centuries.

The Islamic City: Islamic visual culture studied through the prism of architecture and urbanism. Comparative history of the development of Islamic cities, selected themes in urban studies.

Arts of the Islamic Book: the arts of the luxury book in the Islamic world, including critical study of the question of representation in Islam, the relationship of word and image, the discipline of calligraphy, ideas about beauty, representational strategies in Persianate painting, the development of art histories and of connoisseurship in Islamic societies.

Art, Architecture and Human Rights: study of human rights as they relate to art, architecture, and cultural heritage. It examines dimensions of culture as a human right, as well as the artistic expression of human rights.

Visual Theory: foundation course in the graduate study of Art History. Study of the history and methods of art history. Study of the connections between the aesthetic theories that drive our field and the social history of the institutions that sustain it, including museums.

Contests over Art: Culture, Conflict, and the Art World: during conflict and war, art and architecture are often among the first casualties. Opponents destroy each other’s cultural heritage, or appropriate it. What is the relationship of art and conflict? How do societies reconstruct their heritage after traumatic episodes? How do art institutions face contests over art? What is the role of art historians?

Encountering Islamic Art: In History and on Exhibition: this seminar examines the historic development of the category “Islamic art and architecture,” the historiographic debates within it including current challenges, as well as the manner in which Islamic art has been exhibited in museums and the contemporary challenges.

The Missing Pages: The Modern Life of a Medieval Manuscript, from Genocide to Justice (Redwood City, CA: Stanford University Press, 2019)

The Image of an Ottoman City: Imperial Architecture and Urban Experience in Aleppo in the Sixteenth and Seventeenth Centuries (Leiden: E.J. Brill, 2004).  Winner of the Spiro Kostof Book Award from the Society of Architectural Historians, 2006. www.brill.com/image-ottoman-city

“Cultural Heritage and the Arab Spring: War over Culture, Culture of War, and Culture War,” International Journal of Islamic Architecture 5:2 (2016): 245-263.

“Preserving the Medieval City of Ani: Cultural Heritage Between Contest and Reconciliation,” Journal of the Society of Architectural Historians 73:4 (December 2014): 528-55. Winner of the Ömer Lütfi Barkan Article Prize from the Ottoman and Turkish Studies Association, 2015

“An Uneasy Historiography: The Legacy of Ottoman Architecture in the Former Arab Provinces,” Muqarnas: An Annual on the Visual Culture of the Islamic World, vol. 24 (2007), special issue: Historiography and Ideology: Architectural Heritage of the “Lands of Rum,” ed. Gülru Necipoglu and Sibel Bozdogan, 27-43

“Deviant Dervishes: Space, Gender and the Construction of Antinomian Piety in Ottoman Aleppo,” International Journal of Middle East Studies 37:4 (2005): 535-65. Winner of the Best Article Prize from the Syrian Studies Association, 2007

“Museums and the Construction of National History in Syria and Lebanon,” in The British and French Mandates in Comparative Perspective, ed. Nadine Méouchy and Peter Sluglett (Leiden: E. J. Brill, 2004), 185-202 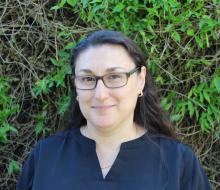