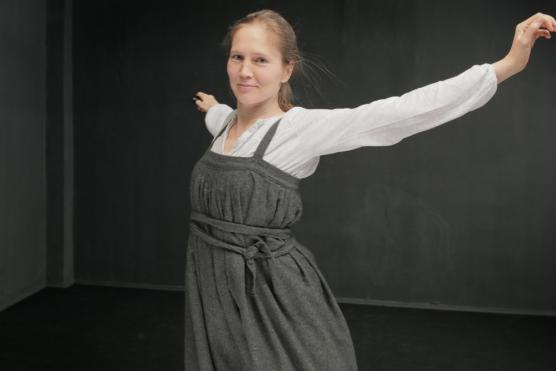 May 18, 2019 MS in Mathematics from the Ural State UniversityMFA in Dance from the George Washington University

Ekaterina Zharinova is a Russian dance artist. Ekaterina graduated from the Contemporary Dance School of the Yekaterinburg Center for Contemporary Arts under director Lev Shulman in 2000. For the next five theater seasons, she danced extensively with the prominent Russian contemporary dance company Provincial Dances under choreographer Tatiana Baganova. Since 2006, she has been working independently as well as in artistic collaborations, presented her works in Russia, Spain, Belgium, and in the US. In 2007-2017, Ekaterina ran the Small Format festival of contemporary dance and performance art in Yekaterinburg, Russia. Her research interests lie at the intersection of dance, mathematics and technology. She received an MS in Mathematics from the Ural State University named after Maxim Gorky in 2001 and an MFA in Dance from the George Washington University last year. Ekaterina is 2017 C.A.S.T. Award Recipient (The Maida Withers Dance Construction Company Innovation Award for originality and risk in performance art) and participant of the Fulbright Graduate Student Program (SUNY Purchase) in 2007-2008.

Student Profile
May 18, 2019 MS in Mathematics from the Ural State UniversityMFA in Dance from the George Washington University
ekazha[remove-this-and-replace-with-at]ucdavis.edu