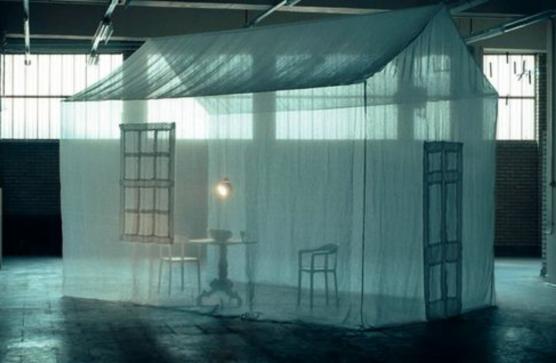 REFUGE- An Immersive Theatrical Experience, a devised performance project, will be presented by the UC Davis Department of Theatre and Dance March 2-4 in the Main Theater, Wright Hall.

Created and directed by Granada Artists-in-Residence David Adam Moore and Vita Tzykun, REFUGE is an immersive theatre work that draws from Tzykun’s experience as a Ukrainian refugee who fled the USSR with her family in 1990. Decades later, witnessing the people of her homeland fight for their survival raised traces of the past to the surface that she thought were long dormant. Through movement, spoken word, walk-through immersive environments, live music, and interactive experiences, REFUGE will explore the universal, yet sharply relevant, subjects of home; belonging; ties to ones heritage, language, and cultural identity; stability vs. chaos; separation; grief; and hope.

David Adam Moore is a highly sought-after leading baritone by major opera houses and orchestras worldwide, including the Metropolitan Opera, Royal Opera House Covent Garden, Teatro alla Scala, Lyric Opera of Chicago, Salzburg Festival and Carnegie Hall. Also notable for his work as a projection designer, composer, digital media artist, and stage director, Moore recently made his Lyric Opera of Chicago stage design debut as projection designer for a new production of Faust, in which he collaborated with renowned sculptor/animator John Frame and stage/film designer Vita Tzykun. Working in partnership with Tzykun, he is a founding member of GLMMR–an NYC-based interdisciplinary art collective that works in a variety of artistic fields.

Victoria “Vita” Tzykun [tsee-‘koon] is a Ukrainian-Israeli-American artist from Odessa. She has designed for companies such as Lyric Opera of Chicago, Santa Fe Opera, Norwegian Opera, The Bolshoi Theater, LA Opera, Houston Grand Opera, Seattle Opera, Minnesota Opera, Opera Philadelphia, and Wexford Opera Festival (Ireland), among others.
Her numerous film and tv credits include design and art direction for Lady Gaga, production design for several award-winning films, and commercials for leading brands such as PBS, DirectTV, Axe, Bulova, and Qualcomm.

Performances begin at 7 p.m. Adult tickets are $10, faculty/staff tickets are $8, and student/senior tickets are $5. Tickets may be purchased at the UC Davis Ticket Office, located on the north side of Aggie Stadium, 10 a.m. to 5 p.m. weekdays, by phone 530-752-2471 during the same hours, or online at theatredance.ucdavis.edu.