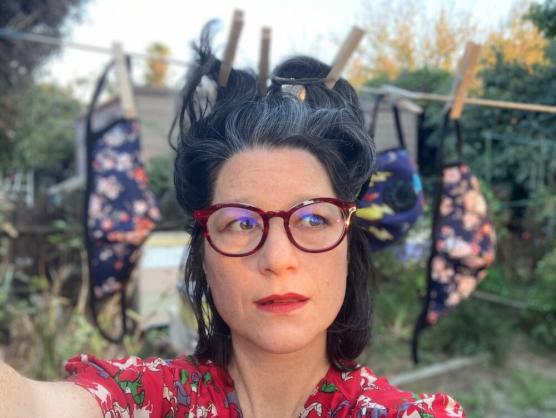 Erika Chong Shuch is a performance maker, choreographer and director whose topic-driven ruminations coalesce into imagistic assemblages of music, movement, text, and design. Interested in expanding ideas around how performance is created and shared, Shuch’s work has been performed in city halls, theaters, industrial offices spaces, diners, parking lots and food courts.

Her recent projects include For You, a dedicated practice of performance making proceeding from these two desires: Make performances based on, and for, a specific individual; bring together diverse groups of strangers for intimate encounters. Shuch has adapted For You, to small groups of people living with dementia and their caregivers. They are also working with the Momentary, a new contemporary Art Space in Arkansas to develop For You, for new audiences coming to celebrate the Momentary’s opening.

Created in collaboration with Rowena Richie and Ryan Tacata, For You is a project of Creative Capital, commissioned by Yerba Buena Center for the Arts and has been supported by Headlands Center for the Arts, San Francisco Museum of Design and Performance, Franconia House.

She received the 2016 Creative Capital Grant, Center for Cultural Innovation’s Investing in Artist’s Grant, Gerbode Foundation’s Emerging Choreographer’s Award, Goldie Award, Falstaff Award, ongoing support from SF Art’s Commission and Zellerbach Family Fund, Helen Hayes Award (nominee) for Indecent at The Arena, and for A Midsummer Night’s Dream and The Conference of the Birds at the Folger Theater/DC.  Directing credits include Lily’s Revenge, The Love Act (by Taylor Mac) at the Magic Theatre in San Francisco and co-creating/directing Iron Shoes with Kitka Women’s Vocal Ensemble. Other directing credits include Eurydice and God’s Ear at Shotgun Players. Erika was associate director for The Gift of Nothing at the Kennedy Center.

The Erika Chong Shuch Performance Project is a fiscally sponsored company of Intersection for the Arts and has been creating original performance work under the artistic direction of Chong Shuch since 2002.