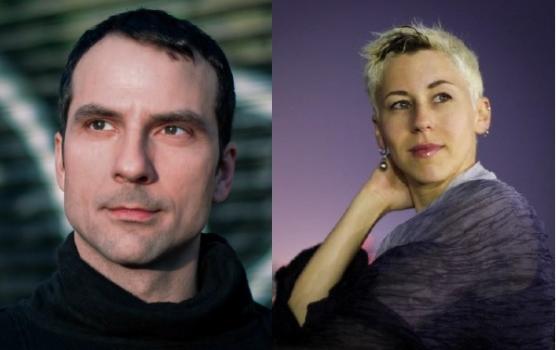 Known widely for his work as a performer, digital media artist, projection
designer, composer, and stage director, David Adam Moore made his Metropolitan Opera debut as a leading baritone in The Exterminating Angel and his Lyric Opera of Chicago debut in Faust as a projection designer in the same season. As an operatic soloist, Moore performs regularly with major opera houses and orchestras worldwide, including the Metropolitan Opera, Royal Opera House Covent Garden, Teatro alla Scala, Lyric Opera of Chicago, Salzburg Festival, Carnegie Hall, and Teatro Colòn (Buenos Aires). His performances have been broadcast on BBC, Arte television, NPR, and Radio France, and recorded by Erato, Warner Classics, BMG, and Innova records.

A specialist in digital media, Moore’s projection design work has been
featured in Lighting and Sound America Magazine. His other interactive
works and collaborations have been presented by organizations including
the Guggenheim Museum (Holly Herndon: Blood Makes Noise), 92nd Y
(Choreo Teatro), .NO Gallery (Katy Gunn), NYC’s Town Hall (Nick Hallett
and Performa), and Sybarite 5. His award-winning photography has been
published by the Frankfurter Allgemeine, Boosey and Hawkes Music, and
the San Diego Union-Tribune.

Working in partnership with stage/film designer, Vita Tzykun, he is a founding member of GLMMR – an NYC-based interdisciplinary art collective that works in a variety of artistic fields. GLMMR’s latest original work, Book of Dreams: chapter sand, is an electro-acoustic performance installation featuring an electronic composition by Moore, an interlocking vocal composition by David T. Little, production design and direction by Tzykun, and sound-reactive video design by Moore. GLMMR’s multimedia staging of Schubert’s Winterreise, starring Moore, has garnered critical acclaim in productions by The Atlanta Opera, Portland Opera, Des Moines Metro Opera, Anchorage Opera, and in its NYC premiere at National Sawdust. Other stage productions by GLMMR include set, costume, and projection design for David T. Little’s Soldier Songs at The Atlanta Opera and in a PBS-televised production, starring Moore, for San Diego Opera. GLMMR created the largest-scale production to date of Michael Nyman’s opera The Man Who Mistook His Wife for a Hat, based on the book by Oliver Sacks. Co-directed and co-designed by Tzykun and Moore in collaboration with a team of consulting neurologists, the production premiered in 2015, is set to make its European debut in an upcoming season, and will be featured in a forthcoming documentary about the life and work of Dr. Sacks.

Moore holds degrees from the University of Cincinnati College-Conservatory of Music and Oberlin Conservatory of Music, where he was a protégé of the influential voice pedagogue Richard Miller. He co-authored articles with Miller on vocal acoustics and received research grants from the McNair Foundation and the National Academy of Recording Arts and Sciences. He now regularly teaches workshops and masterclasses for academic institutions throughout the U.S. and Canada, including Mannes School of Music, Rice University Sheperd School of Music, Oberlin Conservatory, University of Texas, and San Diego State University. He has served on the guest faculty of Carnegie Hall’s Weill
Music Institute and Mannes School of Music at the New School. He also serves on the advisory boards of San Diego Opera’s Opera Hack and Austin Opera’s Innovation Council, where he collaborates with other thought leaders and technologists from major corporations and cultural institutions to find new paths forward from the intersection of art
and technology.

In 2021, Moore will join the immersive design and production studio Senseos as Creative Director and Head of
Creative Technologies.

Her numerous film and tv credits include design and art direction for Lady Gaga, production design for several award-winning films, and commercials for leading brands such as PBS, DirectTV, Axe, Bulova, and Qualcomm.

Her work was given a solo exhibition at Opera America’s National Opera Center in New York, and has been featured in exhibitions at the Entertainment Industry Expo in NYC, Habima National Theater in
Tel-Aviv, and the World Stage Design Exhibition in Toronto. She has been profiled by publications including Entertainment Design and Lighting & Sound America, and was nominated for Designer of the Year by the International Opera Awards.

Tzykun has served as an advisor for the National Endowment for the Arts and currently works with leading technologists on the advisory boards of both San Diego Opera’s Opera Hack and Austin Opera’s Innovation Council.

In 2021, she will join the immersive design and production studio Senseos as Lead Creative Director.