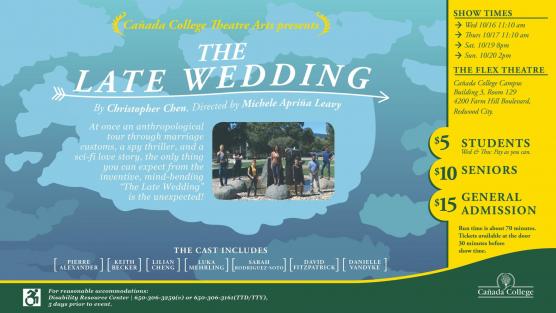 Lecturer and alumna Michele Apriña Leavy, M.F.A, theatre and dance, 1994, is directing Christopher Chen’s “The Late Wedding” for the Cañada College Department of Theater Arts. The production runs Oct. 16, 17, 19 and 20 at the Flex Theatre.

Chen, a bay-area native, takes his cue from the sly writings of Italian fabulist author, Italo Calvino. His winking second person narrative and meta-theatricality are delivered by a seven-person shape-shifting cast of Cañada students, who guide you on a wild and delightful examination of love and longing. At once an anthropological tour through marriage customs, a spy thriller, and a sci-fi love story, the only thing you can expect from the inventive, mind-bending “The Late Wedding’ is the unexpected!

Originally commissioned in by San Francisco’s Crowded Fire Theater Company, the play had its premiere with company in 2014. Since then, it has been produced at various colleges and theater companies across the country. This production marks the play’s fifth anniversary of its premiere.

Tickets are available at the door.