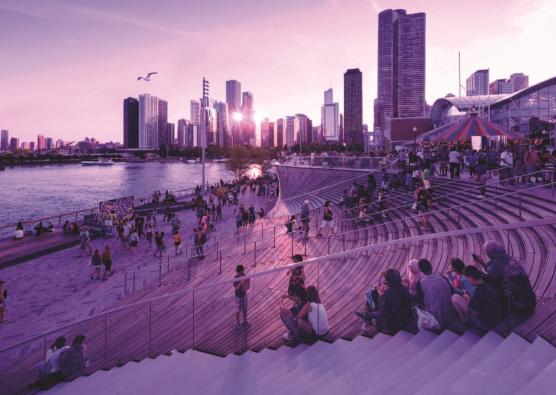 UC Placemaking presents Eric Bunge of Brooklyn based nARCHITECTS as part of the Placemaking speaker series on Feb. 5 at 6 p.m. The event is free and open to the public with a reception to follow.

Is architecture inherently complete? Or is it a state of incompletion and seeming inadequacy that incites us to imagine architecture as an armature for an ever-changing daily life? Across a range of buildings, public spaces, and ephemeral installations, nARCHITECTS argues for the formal and social potential of an architecture that remains somehow incomplete and ambiguously perceived—or in the architects’ words, Almost Buildings.

Eric Bunge, FAIA, is a co-founding Principal of nARCHITECTS, and an Adjunct Assistant Professor at the Graduate School of Architecture, Planning and Preservation at Columbia University. Along with Mimi Hoang, he oversees the design and technical development of all projects in the office. Eric received a Master of Architecture from Harvard University and a Bachelor of Architecture from McGill University. Prior to founding nARCHITECTS, he trained in New York, Boston, Paris, Calcutta and London. Eric has also taught at Harvard University, Yale University, Parsons School of Design, R.I.S.D., UC Berkeley and University of Toronto.

UC Placemaking is a multicampus initiative that seeks to enrich the connection between people and place through the arts and design. Generous support has been provided by Imagining America, the UC Davis Department of Design, and The University of California.