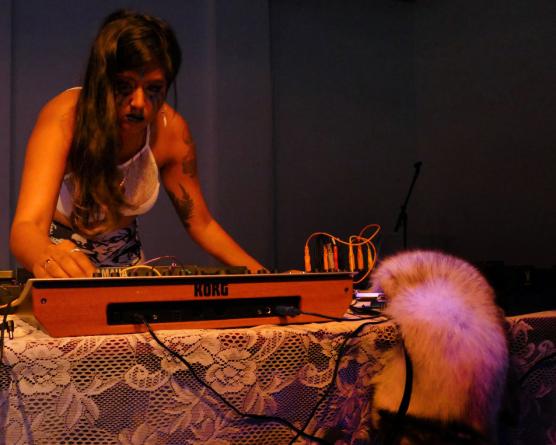 Sharmi Basu is an Oakland born and based South Asian woman of color creating experimental music as a means of decolonizing musical language. She attempts to catalyze a political, yet ethereal aesthetic by combining her anti-colonial and anti-imperialist politics with a commitment to spirituality within the arts. Beast Nest, Sharmi’s primary performing project, utilizes an unwavering depression and restrained horror to channel left-eyed spirits. She is an MFA graduate from the Center for Contemporary Music at Mills College in Electronic Music and Recording Media and has worked with Fred Frith, Roscoe Mitchell, John Bischoff, Pauline Oliveros, Chris Brown, Maggi Payne, and more. Her workshops on “Decolonizing Sound” have been featured at the International Society for Improvised Music, the Empowering Women of Color Conference, and have reached international audiences. She performs almost 100 times a year and has toured through the United States and Canada as well as internationally in Europe.

She specializes in new media controllers, improvisation in electronic music, and intersectionality within music and social justice. She also founded and hosts an all people-of-color improvisation and performance group called the MARA Performance Collective in Oakland, CA and was an organizer of the Universe is Lit: A Bay Area Black and Brown Punk Fest. Sharmi is imperfect and is always learning and hopes to help develop a world that embraces and nourishes self-empowerment for all people.