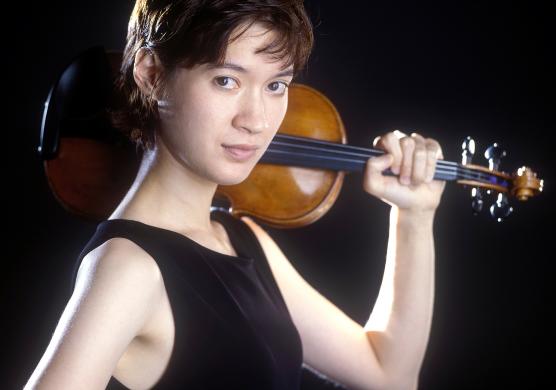 Violinist and violist Miranda Cuckson delights audiences in the US and abroad with her exciting playing of a range of repertoire and styles. Coming from a thorough grounding in the classical repertoire, she has become one of the most acclaimed, probing and adventurous performers of contemporary music. She is passionate about the creative role of the performer/interpreter in the artistic process and in communicating the music. She appears as soloist and chamber musician at concert halls and festivals, schools and universities, galleries and informal spaces.

Downbeat magazine recently stated “violinist Miranda Cuckson reaffirms her standing as one of the most sensitive and electric interpreters of new music.” Her recording of Luigi Nono’s “La lontananza nostalgica utopica futura” for violin and electronics with Christopher Burns (Urlicht AV) was named one of the best albums of 2012 by the New York Times. In September 2017, she premiered a violin concerto written for her by Georg Friedrich Haas at the Suntory Festival with the Tokyo Symphony Orchestra, and she performs it in 2018 with the Staatsorchester Stuttgart and the Orchestra of Casa da Musica in Porto.

Samuel Clark-McHale (b. 1992) is an American composer currently residing in Davis, CA. His works have been performed by, among others, Ensemble Signal, Quartetto Indaco, and the Illinois Modern Ensemble at venues and festivals including June in Buffalo and the highSCORE New Music Festival. His piece metallic cocaine bebop for Pierrot ensemble was a 2015 ASCAP Morton Gould Award Finalist.

Born and raised in Tehran, Iran, Aida Shirazi is a Ph.D. student in composition and works with Pablo Ortiz.  Shirazi’s music is described as “well-made” and “affecting” by The New Yorker. She holds her B.A. in classical piano from Tehran University of Art (Iran), and her B.M. in music composition and theory from Bilkent University (Turkey). She studied santoor (traditional Iranian dulcimer) with Parissa Khosravi Samani.