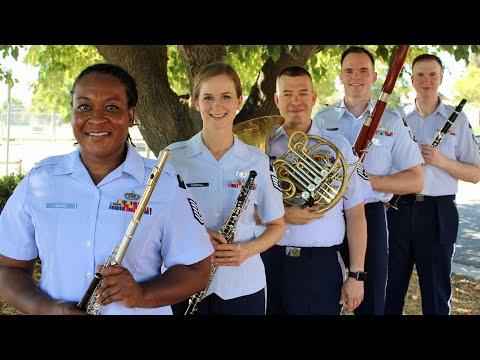 Gustav Holst: Jupiter from The Planets

The Golden West Winds is part of the United States Air Force Band of the Golden West from Travis Air Force Base, California. Comprised of flute, oboe, clarinet, horn, and bassoon, this ensemble supports a wide variety of musical events ranging from military ceremonies and patriotic shows to educational programs and recitals of original works for woodwind quintet. To support these events the Golden West Winds plays music of all styles including marches, jazz, and classical music.

Tailoring every show to its audience, the Golden West Winds performs a variety of different community relations concerts throughout the Western United States. They have performed at schools such as the University of Nevada Las Vegas and the University of Redlands. The ensemble’s recital show was featured in 2012 at the Camerata Musica concert series as well as the College of the Siskiyous Performing Arts Series. The members of the Golden West Winds are all professional Air Force musicians working in support of Air Force and Air Mobility Command official military recruiting and community relations objectives.