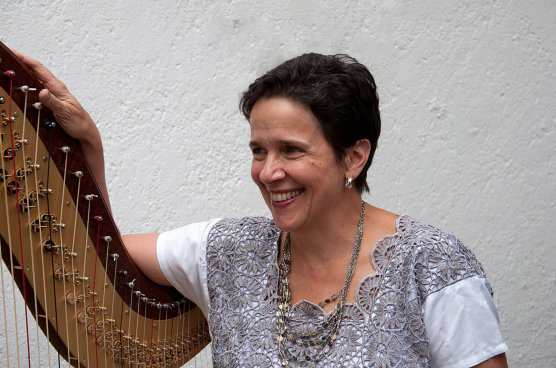 Dvořák: Symphony No. 8 in G Major

Mercedes Gómez Benet studied at the National Conservatory of Music with Judith Flores Alatorre, and later with Urszula Mazurek, Marjorie Tyre, Marian Shaffer, Mimi Allen and Nicanor Zabaleta. She has been the harpist of the Symphony Orchestra of the State of Mexico, the Symphony Orchestra of the Palacio de Minería and of the Philharmonic Orchestra of UNAM. Gómez has premiered and recorded several Latin American harp concertos and other harp works dedicated to her by composers such as Eugenio Toussaint, Samuel Zyman, Javier Álvarez, Gerardo Tamez, Jorge Torres, Marcela Rodríguez, Gerhart Muench, Armando Luna, Pablo Ortiz, Alonso Toro, Gerardo Dirié and Manuel Sosa, among others. She compiled a handbook of Mexican folk music with harp from Veracruz in Harp Chilpachole, with Marian Shaffer and Octavio Vega.

Besides collaborating with Javier Álvarez on his album Progresión with his two pieces for harp and electro-acoustic sounds, According to Differences and Sonoroson, Gómez has recorded ten CDs alone and with her colleagues. Gómez has—together with Venezuelan Marisela González and Brazilian Cristina Braga—organized Talleres itinerantes para arpa de pedales for Latin American harp students. The workshop series is sponsored by Camac Harps, and as an integrated part of them, special soloist guest Isabelle Moretti has so far given master classes in Mexico and Brazil. Janet Paulus, Artemisa Reyes, Larisa Fedorova and Lucrecia Jancsa are other collaborating harpists.

She was artist-in-residence at UC Davis, California, (1999) and at Banff Center for the Arts (2005). Since 1999 she has been part of Sondos—dúo de arpas with Janet Paulus, and since 2006 she has been part of Ensemble Terra Mestiza directed by composer and guitarist Gerardo Tamez. In 2017 and 2018 she performed in Morocco and in Tasmania, where she also gave master classes. In 2018 she was part of the jury at the Fifth Iberian Chamber Music Competition in Madrid. The National Institute of Fine Arts (INBA) has awarded her prizes designated to art teachers for academic achievements and pedagogical work in 2012, 2014, and 2018.

Gómez has written two educational plays for harp students: Vania and the Open Windows, which has been presented in Mexico, Venezuela, France, and the United States, as well as Francis and the Curious Boy, which has been performed in Mexico and Spain. The project presents a fictional semi-documentary about legendary composer and harpist J. F. Naderman’s childhood and it is now under preparation for presentation in China.

In 2011 she received her master’s of music degree from the Royal College of Music in Stockholm, Sweden. In 2016 she became vice president for the Americas for the World Harp Congress.