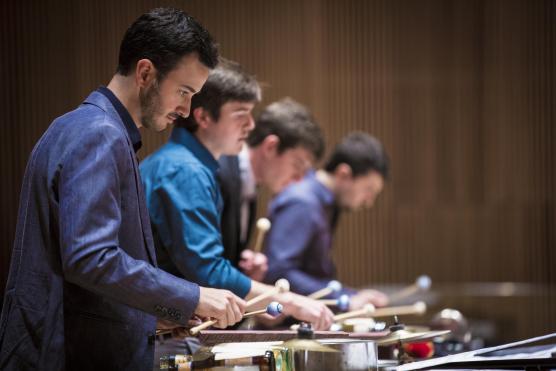 Program to be announced.

* Presented by the Mondavi Center for the Performing Arts *

Lauded by The Washington Post as “revitalizing the world of contemporary music” with “jaw- dropping virtuosity,” and “a bombshell of raw-talent” by I Care if You Listen, Sandbox Percussion has established themselves as a leading proponent in this generation of contemporary percussion chamber music. Brought together by their love of chamber music and the simple joy of playing together, Sandbox Percussion captivates audiences with performances that are both visually and aurally stunning. Through compelling collaborations with composers and performers, Jonathan Allen, Victor Caccese, Ian Rosenbaum and Terry Sweeney seek to engage a wider audience for classical music.

Last season Sandbox Percussion presented 36 performances throughout the United States, and made their international debut at the Festival International de Musique de Chambre en Charente, France. During a tour across the United States they presented four separate programs including a special performance of Viet Cuong’s concerto, Re(new)al with the Kaleidoscope Chamber Orchestra. Sandbox also presented the first ever percussion concert at the Cosmos Club in Washington, DC which featured works by Andy Akiho, David Crowell, Thomas Kotcheff, Victor Caccese, Steve Reich, and J.S. Bach. In November of 2017, Sandbox performed György Ligeti’s Síppal, Dobbal, Nádihegedüvel on the opening evening concert at the Percussive Arts Society International Convention along with mezzo-soprano, Elspeth Davis. They performed this same piece alongside Christopher Cerrone’s Goldbeater’s Skin on the Time’s Arrow concert series at Trinty Church.

In addition to keeping a busy concert schedule Sandbox has also participated in various masterclasses and coachings at schools such as the Peabody Conservatory, Curtis Institute, the University of Southern California, Kansas University, Cornell University, and Furman University. While there they coached students on some of the most pivotal works in the percussion repertoire including Steve Reich’s Drumming, György Ligeti’s, Síppal, Dobbal, Nádihegedüvel and John Cage’s Third Construction. These teaching experiences have inspired the quartet to pursue a role of pedagogy and mentorship for today’s young generation of musicians. This season Sandbox Percussion will present the fourth annual NYU Sandbox Percussion Seminar. This week long seminar invites percussion students from across the globe to rehearse and perform some of today’s leading percussion chamber music repertoire. A culminating performance is held at the iconic Brooklyn venue, National Sawdust.

Composition has been a growing interest for Sandbox Percussion in the past five years. Jonathan Allen and Victor Caccese have collectively composed six pieces for the quartet. Last season Jonathan Allen’s Sonata and Victor Caccese’s bell patterns were featured on sixteen separate programs throughout the U.S. Sandbox has also worked closely with composer David Crowell on a marimba arrangement of his saxophone sextet, Point Reyes. They gave the world premiere in November 2014 in Brooklyn, NY.

Presented by the Mondavi Center for the Performing Arts.