For auditions, please sign up for an available time online.

The UC Davis Concert Band Program has existed on the campus for more than 50 years, performing in commencements, ceremonies, and its own concerts.

The UC Davis Concert Band is an auditioned wind-symphony sized group of about 55 musicians and plays during the Fall, Winter, and Spring Quarters.  Both groups are open to all students, professors, alumni, and community members. The Concert Band Program is proud to include students from over 30 majors and minors on campus.

Interested in seeing performances from past concert bands? Look at these links!

Schedule an Audition Sign up for a time online! 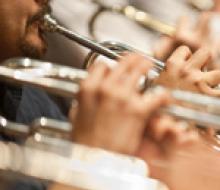 Everyone is welcome to audition! The Concert Band Program is proud to include students from over 30 majors on campus.

There are two bands during the year: