Heghnar Watenpaugh on a Medieval Gospel Book, Genocide and Restitution 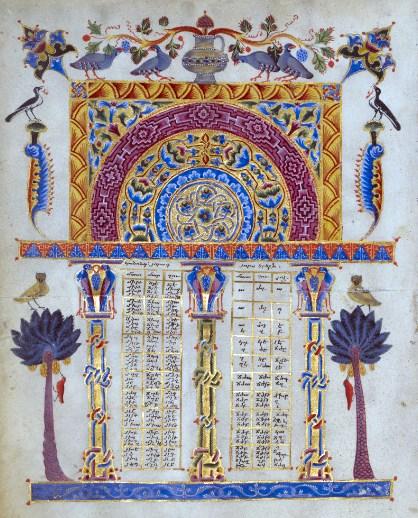 Heghnar Watenpaugh will be speaking at UC Berkeley on “A Medieval Gospel Book from Genocide to Restitution: Toros Roslin’s Zeytun Gospels, 1915-2015.”

The destruction of art, especially religious art, is one of the components of the genocidal phenomenon. Claims for the restitution of surviving religious and artistic objects form part post-conflict processes of survival or reconciliation. The widespread destruction of religious art is a well known dimension of the Armenian Genocide, yet its has rarely attracted critical attention. A rare example of Armenian art to have escaped the destruction of the Genocide, the Zeytun Gospels is a survivor object. In 1256, Toros Roslin illuminated a Gospel Book, now known as the Zeytun Gospels. For centuries, the manuscript was kept in remote churches in present-day southern Turkey. Events set in motion during the Armenian Genocide of 1915-1922 cast the holy manuscript out of its church and cleaved it into two. Eight pages from the manuscript, known as the Canon Tables, ended up at the Getty Museum in Los Angeles in the 1990’s. By then, art historians had recognized Toros Roslin as the most important illuminator in Armenian art, turning the sacred relic into a priceless work of art. In 2010 the Armenian Church sued the Getty for the return of the eight pages. The suit, and its eventual settlement, prompted questions about the ownership of the manuscript fragment, its connection to the Armenian Genocide, as well about genocide and culture, the right of persecuted groups to cultural heritage and the responsibilities of museums. This case embodies the defining elements of art history in the 21st century: the materiality of the object, the contest between communities and powerful institutions for control over cultural patrimony, the human right to culture, the impact of the global art market, and the ways in which objects mediate individual and group identities.

This event is sponsored by the Institute of Slavic, East European, and Eurasian Studies (ISEEES) and the Armenian Studies Program.

This announcement has been archived and may contain content that is out of date.
Announcement
January 24, 2018