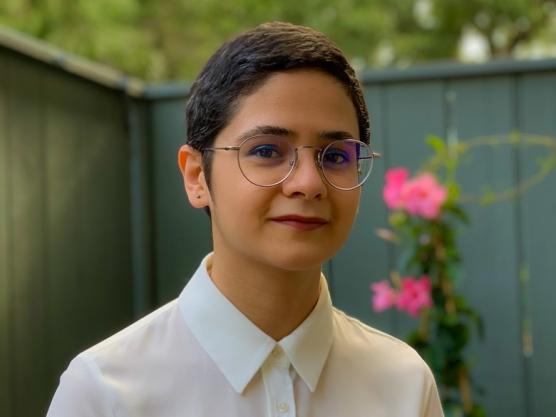 Aida Shirazi (PhD student in composition at UC Davis) spoke to NPR Capital Public Radio’s Jennifer Reason in a September 1, 2020 interview. Aida began by relating her grandfather’s musical interest and influence and her initial music study in Iran, which included several female students in a bachelor’s program despite Iran’s  government restrictions on women. Later she studied music composition in Turkey and then came to the United States, entering the PhD program in composition at UC Davis. In 2017 she helped found, along with two other Iranian women composers, the Iranian Female Composers Association for the support of female composers from Iran. The three women met on social media and soon discovered more Iranian women composers than anticipated, resulting in a concert in August 2019 in which members had their music performed by the International Contemporary Ensemble at Lincoln Center.

The Iranian Female Composers Association aims to develop a formal mentorship program and has drawn more recent national attention, including a New York Times feature article (May 18, 2020), in which Shirazi’s piece Shadow of a Leaf in Water, written for Ensemble Dal Niente’s residency at UC Davis, was described: “it unfolds with deliberation, speaking in a musical language that whispers and sighs.”

Shirazi draws inspiration from Iranian classical music, literature, and the spoken word, using electronics in the mix of instruments and voice. She has been selected as one of ten composers from around the world to participate in the IRCAM Cursus Program for Composition and Computer Music in Paris, France, for 2020–21.

Born and raised in Tehran, Iran, Aida Shirazi is a Ph.D. student in composition and works with Pablo Ortiz.  Shirazi’s music is described as “well-made” and “affecting” by The New Yorker. She holds her B.A. in classical piano from Tehran University of Art (Iran), and her B.M. in music composition and theory from Bilkent University (Turkey). She studied santoor (traditional Iranian dulcimer) with Parissa Khosravi Samani.