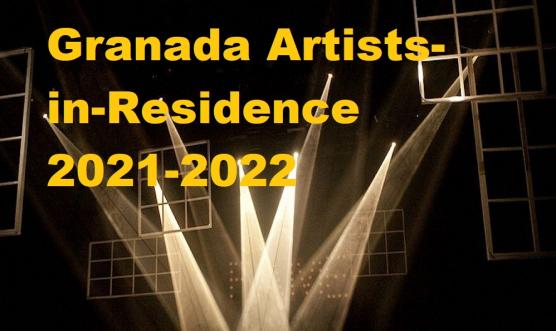 The Granada Artist-in-Residence program continues its legacy of bringing innovative theatre and dance creators to UC Davis with diverse and challenging projects.

In fall quarter, creative partners David Adam Moore and Vita Tzykun collaborate on The Beautiful Dark, a semi-scripted immersive and interactive experience based on The Theban Plays (Antigone, Oedipus Rex and Oedipus at Colonus). Breaking the fourth wall, the work will be performed in unconventional spaces and encourages audience participation and incorporates emerging technology to enrich and deepen the storytelling. Performs end of fall quarter.

Moore is a renowned American baritone who has also forged separate careers as a director, composer, and video designer. He co-founded two New York-based arts collectives – GLMMR and Choreo Teatro – with whom he has created music, video, and performance works in venues including the 92nd St. Y, National Sawdust, NO Gallery, and The Cell. Tzykun has designed sets, costumes, and projections for companies such as The Bolshoi Theater (Russia), Norwegian Opera, Lyric Opera of Chicago, San Francisco Opera, Santa Fe Opera, LA Opera, Houston Grand Opera, Seattle Opera, Minnesota Opera, Opera Philadelphia, and Wexford Opera Festival (Ireland), among others. Her numerous film and television credits include design and art direction for Lady Gaga, and production design for several award-winning films.

Tony Award-nominated director/choreographer John Carrafa joins UC Davis in winter 2022 bringing with him the first draft of his work Chosin. The original project is the story of Marguerite Higgins, the first female to win the Pulitizer Prize for combat reporting covering the Battle of Chosin in North Korea in 1950. A movement as well as scripted piece, Maggie tells the story of men on both sides of the battle and addresses the question Why? Tentative performance dates are late February and early March.

Carrafa has choreographed over 25 feature films including Something Borrowed, The Other Guys, The Thomas Crown Affair, Bride Wars, and The Polar Express (2004 Media Choreography Honors). He is the two-time Tony Award-nominated choreographer of Urinetown and the revival of Into the Woods receiving both nominations in the same year. Carrafa has also received an Obie Award, Lucille Lortel Award and Dora Award, as well as nominations for Drama Desk and Outer Critics Circle Awards for his work in the theater.

In spring 2022, performance maker, director, and choreographer Erika Chong Shuch will engage a group of student collaborators to workshop a new, devised performance work. Digging into “House Parties” and “Welcomings” as a springboard, we’ll make playful, performative structures that invite audiences into a participatory celebration. Refined, choreography will saddle up with rigorously shaped chaos. Perhaps a party band will serenade from atop a coffee table. There will be cake.